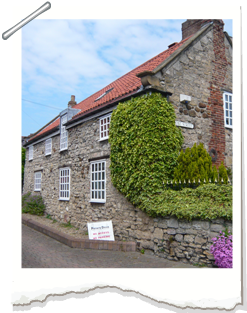 The following is a potted history of the village. The main Atlas tells the story of Cleadon in much more detail, the history of the great houses,and former residents, the church and Methodist Chapel, schools, inns,the Cleadon Cottage Homes (children's home), the pumping station, shops, railway, farms and mill.

Prehistoric Cleadon
The first evidence of human activity in the area comes from Whitburn where material dating to back to the Mesolithic period (10,000 - 4,500 BC) has been found. At that time the landscape would have been covered by forests, with herds of red deer, wild cattle, reindeer and elk roaming across the uplands and coastal plains. These animals would have provided a valuable source of food to small groups of hunter-gatherers living all along the coastal plain.

In the Neolithic period (4,500 - 2,300BC), the introduction of farming gradually led to a more settled way of life. Forest and woodland was cleared to make way for enclosed fields of wheat and barley. The first direct evidence of occupation in Cleadon comes from this period a flint arrowhead and flint scatter perhaps associated with a temporary settlement or a hunting party. A beautiful polished stone axehead was also found on Cleadon Hills, possibly associated with a barrow (burial) site now long disappeared.

There is no direct evidence of later prehistoric activity during either the Bronze Age (2,300 - 700 BC) or Iron Age (700 BC - AD 43). However, this does not mean that people were not living on the fertile soils of the plateau but just that, for whatever reason, the remains of these sites have not been preserved or found. A Bronze Age 'cist' burial is known from nearby Whitburn, and evidence of Iron Age occupation has been identified beneath the Roman fort at South Shields (a 'cist is a crouched burial of a body in a stone lined pit, sometimes covered by a small cairn).

Roman (AD 43 - 410)
The Roman fort of Arbeia, at South Shields, lies 6.5 km north of Cleadon. It is highly likely that the farmers in the area would have provided supplies to the army and possibly traded with the soldiers, keen to supplement their rations with local fresh food and delicacies. While there are no known Roman finds from Cleadon itself, several Roman coins have been found at Whitburn and Fulwell.

A stone bearing the Latin inscription 'PETRA MARC - FLA', found close to Cleadon Hills Farm, is thought to be a 19th-century hoax.

Anglo-Saxon (AD410 - 1066)
Cleadon as we know it today was probably founded during this period. The name Cleadon is Old English in origin, the language spoken by the Anglo-Saxons. Other Old English place names nearby are Whitburn, meaning 'white barn' and Boldon meaning 'building on a 'hill', perhaps a farmstead.

In translation the name means 'hill of steep slopes', which is odd given that today, Cleadon is located on the flat ground below the hill. This could mean that the original settlement shifted from the higher ground. This is likely to have occurred in the 7th century when King Ecgfrith granted a large estate, including Whitburn and Cleadon, to found the twin monasteries of Monkwearmouth and Jarrow. Cleadon may have moved at this time, clustering along the main route between the two monasteries.

Medieval
The first documentary reference to the village is in the Boldon Buke, prepared for Bishop Pudsey in AD1183. Sometimes called the Domesday Book of the North, this was a survey of all taxable lands belonging to the Bishop of Durham. There were 28 tenants recorded as living in Cleadon and Whitburn, each owing service to the Bishop in return for land.

The medieval village was laid out on either side of a linear village green, orientated east to west. Cleadon pond marked the eastern end and the village pound (or pinder) the west end. The pound was an enclosure used to keep stray animals that had wandered off the moor until their owners came to claim them. On each side of the green were a series of narrow plots called 'tofts' or 'garths'. Each tenant held a toft as well as a portion of common field and rights to pasture and woodland. Tofts generally featured a 'croft', a small dwelling. As time went by tofts were amalgamated to form larger plots but the old medieval pattern of the village was still clearly evident in the mid 19th century when the first detailed maps of Cleadon were drawn.

The medieval village was surrounded by arable land. In some fields you can still see a distinct ripple effect, the remains of ridge and furrow associated with medieval ploughing. The ridges were used to grow crops, divided by deep ruts - the furrows - that provided drainage. There were three huge communal fields surrounding the village, known simply as North, East and West Field. Cereal crops would have been grown in these, with each villager having their own plot. They also shared grazing land on Cleadon Moor, to the south-west of the village, on what is now called the Plantation Estate. The Lizards were also common pasture, the name deriving from the Old English leasowe, from 'leas' meaning meadowland.

Is Cleadon a Green Village? A Green Village is a form of settlement layout peculiar to County Durham. They are thought to be planned villages laid out by the Bishop of Durham in the 12th or 13th century as the most efficient form to maximise production. Whitburn is acknowledged as a green village but Cleadon has been seen as something different. However, the evidence now suggests that Cleadon may be a failed Green Village, the western half of the settlement not developing in the long-term.

Post - Medieval
In 1587 Queen Elizabeth ordered a survey of the village, the first to draw a distinction between Cleadon and Whitburn. At this time 11 copyhold tenants were living in 'Clevedon'. The largest landholder was Robert Chambers, who also held a substantial amount of property in East Boldon.

The Chambers family are thought to have hailed from Alnwick and probably moved to the area at the invitation of Baron Hylton. In 1509 John Chambers was the Collector for Cleadon, responsible for collecting tax and rents due to the Bishop. This was a role of considerable power and responsibility. The Chambers built Cleadon Tower, parts of which still survive, although the original tower was demolished in the late 18th century. They remained an important local family until the line died out in the late 17th century when the estate was sold to Robert Sutton.

The Civil War (1642 - 1649)
Much of the action during the Civil War was focused in the South and the Midlands but in 1644 Cleadon was in the direct firing line, caught between the Royalist forces at Newcastle and the Parliamentarians at Sunderland, culminating in March in the Battle of Boldon Hill. The Battle was fought in awful conditions with snow on the ground and freezing fog, many on both sides dying of cold. Briar Cottage, on Front Street, may have served as a field hospital after the battle. It was originally the blacksmith's cottage, with the forge in the yard behind. Blacksmiths often served as troop surgeons, cauterizing wounds and amputating limbs.

The 18th Century - The Changing Face of Cleadon
In the 18th century Cleadon became increasingly popular with a new middle-class who had made their fortunes in the emerging industrial and commercial heartlands of South Shields and Sunderland. The village, with its commanding views, clean air and relative peace, offered a sanctuary away from the noise and overcrowding of the urban centres but close enough to conduct business. Two new fine country houses were built during this period, Cleadon House and Cleadon Old Hall. Cleadon Meadows, Cleadon Grange, Cleadon Park and Undercliff followed in the 19th century. Sadly, some of these have been demolished.

Despite the gentrification, the village remained fundamentally a farming community. The 1839 tithe map, the first detailed map of the area, shows four farms in the village centre, all of which probably date back to the medieval period. These were Bainbridge Farm, South Farm, Burdon Farm and East Farm. Outside the village were a further seven farms: Farthing Slade, i, Cleadon Laws, Holder's House, Cleadon Out House, Cleadon Mill and Cleadon Hills.

While not primarily an industrial settlement, two industries did play an important role in the development of the village: stone quarrying and brick production. Stone quarrying had been important since the medieval period and by the 18th century there were a number of small quarries dotted all over Cleadon Hills. You can still see the remains of these today. In the 19th century two huge industrial quarries developed: Cleadon Park and Marsden Quarry. Limestone was initially used for building, and burnt as quicklime for use as a fertiliser. Later it was used in concrete manufacture, and the steel and chemical industries.

Bricks and tiles have been manufactured in Cleadon at least since the 17th century. The first works to open were the explicitly named, Cleadon Brick and Tile works on Tileshed Lane. Bricks from these works were probably used in the construction of Cleadon House. By the 19th century there were four brickworks operating in the area. Production had largely ceased by the outbreak of the Second World War. The former clay pits now form part of the Tileshed's Nature Reserve.

The 19th Century - Further Expansion
The layout of Cleadon village remained largely unchanged from the 18th until the late 19th century, when a large part of the Cleadon House Estate was sold for development. The Plantation Estate, which included Underhill Road, West Park Road, Laburnum Grove and Whitburn Road, was the first of the village housing developments but others soon followed; Oakleigh, Thornleigh, Elmsleigh Gardens, Thirlmere and Sunniside Road, amongst others.

Cleadon at War
Cleadon's proximity to the ports of Sunderland and Tyne meant it was strategically placed as a training centre for troops. There were hutment camps at the Cleadon Cottage Homes and the golf course, and troops were also billeted at Underhill House and Cleadon Meadows, where there was a large training ground. The men took part in drill and weapons training and dug practices trenches. Some of the linear features visible in the field south of Cleadon Mill, may be the remains of practice trenches.

During the Second World War there was an Anti-Aircraft battery where the Soccer Academy now stands. There was also a gun emplacement on Cleadon Hill and, at nearby Welland Farm, a bombing decoy. The golf course and fields to the north of Tileshed Lane were also strewn with aircraft obstructions, ditches aimed at preventing an invasion force landing. Like much of South Tyneside, Cleadon suffered three years of enemy bombing from 1940 to 1943, with several casualties being reported.

Post-War Cleadon
The village suffered badly in the 1960s and '70s at the hands of planners and developers. During this period the appearance of Cleadon changed dramatically but, thankfully, the historic character of the village core remains intact. Today, Cleadon is a welcoming and friendly place with a strong sense of its heritage and cultural identity.