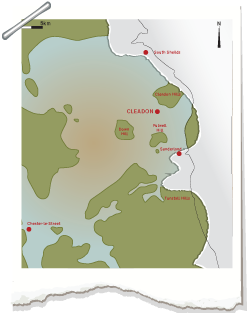 Cleadon lies at the northern extreme of the Durham Magnesian Limestone Plateau, a broad triangle of land stretching along the east coast from the Tyne to the Tees and extending inland to central Durham. The geology of the area has shaped the surrounding landscape, giving it a distinct character and influencing the development and fortunes of the communities that settled upon it. The rocks, soils, natural environment and water courses have determined where settlements have been located; what people could grow and eat; the fuel they used to keep warm and cook; the material they could use to build their houses; the development of roads and railways, and the expansion of industry.

Cleadon's story begins nearly 320 million years ago. The oldest rocks seen at the surface today date to this period, when the British Isles formed part of a much larger land mass that lay almost astride the equator. The region at this time was a vast, forest-covered delta plain. Layers of plant debris on the forest floor were periodically buried beneath layers of sand or mud as the land gradually subsided and the rivers shifted course. As these layers were buried beneath more sediments they became compacted and turned into the rocks we refer to today as the Coal Measures.

By Permian times, about 250 million years ago, northerly movement of the continental plates shifted the land further north of the equator. By this stage the area was a desert, covered by broken rock and lines of sand dunes. These were soon inundated by the waters of the Zechstein Sea that occupied much of what is now the North Sea, Germany, and Eastern Europe. Limy muds that accumulated on the sea floor became the rocks known today as the Magnesian Limestone. Varying conditions during Permian times, including the periodic drying up of the Zechstein Sea, created the complex succession of limestones that give Cleadon's landscape its distinctive character today. These include some internationally important rocks like the famous 'Cannonball' Concretionary Limestones

By around 55 million years ago, during the Tertiary Era, the region had moved closer to its present latitude. During this period, major cracks in the Earth's crust extended across the area and filled with molten rock associated with the formation of the Atlantic Ocean. The result was a series of faults, including the Hebburn Dyke that runs beneath the village.

By the Quaternary Period, about 2.5 million years ago, the region had settled at its present latitude. Repeated episodes of global cooling across much of northern Europe created thick ice sheets over what is now northern England. A variety of erosion features and sediments deposited during these times record the complex movement of ice across the area.

The last ice melted as recently as 11,000 years ago, and since then erosion and depositional processes, coupled with human activity, have shaped, and continue to shape, the changing landscape.