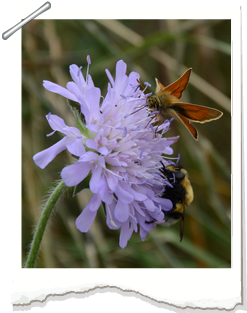 The underlying geology has determined the soil and vegetation types that make up Cleadon's surrounding landscape. The absence of major water resources is compounded by the Magnesian Limestone that allows the majority of rainwater to soak away. On the whole this has led to a dry landscape more conducive to grassland and arable farming than woodland or wetland features. There are a few water features, mainly in the form of small ponds; the most notable of these is in the centre of the village.

Cleadon Hills
Cleadon Hills has been designated as a Site of Special Scientific Interest (SSSI). These are the country's very best wildlife and geological sites. They include some of Britain's most spectacular and beautiful habitats. Cleadon Hills has a number of regionally and nationally rare plant species, including Small Scabious, Betony, Rock Rose, Salad Burnett and Pignut, and a fairly large population of Columbine in the spring. The area is also important for birds and butterflies. Birds include the Lesser Whitethroat, Linnet, Yellowhammer and Skylark. In addition to the common butterfly species, a number of Wall Brown butterflies were recorded, thought until recently to be an exclusively southern species. Other butterfly species include Peacock, Red Admiral, Large, Small and Green-veined White, Common Blue and Small Tortoiseshell

Cleadon Pond
While looking attractive, there are factors limiting the wildlife potential of the pond. But it remains of importance as a source of drinking water for birds and animals, and as a food source for those, like the Grey Wagtail, living off aquatic insects. The main fauna found in the pond is snails and sticklebacks. Rich silt and decomposing vegetation are ideal for them. Other species include Water Boatman, Mosquito, Olive Mayfly, Stonefly, Bloodworm and Pond Skater.

Cleadon Village and Environs
The local limestone used in constructing certain walls and buildings provides habitats for plant species more usually associated with quarry faces, including Hart's Tongue Fern, Wall Rue and Hard Fern, as well as commoner species such as Ivy-leaved Toadflax. The village also has a number of wooded gardens with imported species, such as Monkey Puzzle, Sycamore, Horse Chestnut, Copper Beech and European Larch, some of which may be the legacy of 18th and 19th century landscaping associated with Cleadon's grand houses. There are few veteran native trees.

Tilesheds Local Nature Reserve (LNR)
This provides an important area for nature conservation. It is primarily newly planted woodland but also includes important Magnesian Limestone grassland and a small wetland area. The grassland includes a large population of orchids, as well as species such as Ragged Robin, Greater Knapweed, Glaucous Sedge, Ox-Eye Daisy and Meadow Vetchling. The woodland provides a good habitat for birds and insects including Bullfinch, Greater-spotted Woodpecker and Speckled Wood. The pond provides habitat and breeding ground for water birds, including Mute Swan, Mallard, Goose and Moorhen.

Boldon Flats
Bolden Flats, situated to the south of the village, is subject to flooding, and provides an important wetland habitat ideal for winter wading birds. During the summer, a range of bird life includes Heron, Moorhen, Mallard and the occasional Lapwing and Greylag Goose. A number of bee and butterfly species, including Small White and Speckled Wood frequent the hedgerows and field margins.

Agricultural Areas
Outside the village the area mainly consists of arable agriculture and horse grazing. Remaining hedges are probably the most important habitats, but some annual pioneer species can find a home, including species such as Knotweeds, Pineapple Mayweed and Chamomile. Standard trees, in association with the hedges, provide additional habitats.